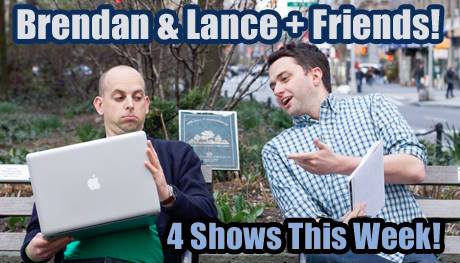 Brendan and Lance have 4 shows this week that they would love for you to come hang with them at. All of them are different and have their own thing happening. Per use, they’re bringing along a bunch of their friends who also happen to be some of the funniest people in the world. It’s gonna be totally rad. Here are the shows and links to each with the lineups/info:

MONDAY, SEPTEMBER 12TH @ 9PM:
Anyone, Can Be President, Even Us @ Carolines On Broadway:
http://www.carolines.com/…/anyone-can-be-president-even-us…/

TUESDAY, SEPTEMBER 13TH @ 9PM:
Seth Herzog‘s awesome show SWEET is having their anniversary show at Webster Hall, and Seth was nice enough to ask us if we wanted to run a show at Slipper Room that night while he is off crushing it at his show. We got a great lineup planned and will announce it on Facebook on Tuesday:
http://www.slipperroom.com/calendar/

WEDNESDAY, SEPTEMBER 14TH @ 9PM:
Gandhi, Is That You? @ Lucky Jacks Bar. This show is also part of the http://www.freestandupfestival.com/.  Tons of awesome shows all over the city.
http://gandhiisthatyou.com/