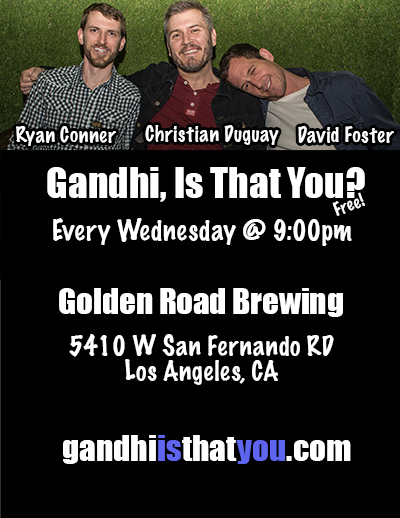 We are very excited to announce that The Gandhi Show is now bi-coastal! Just two weeks shy of the Gandhi Show’s 5 year anniversary in NYC, there will now be a second show running weekly in Los Angeles, CA!

Starting January 21, 2015!
“Gandhi Is That You?” will be happening (Every Weds @ 9pm just like the NYC Show!) in Los Angeles at Golden Road Brewing. The show will be run and hosted by Gandhi Team peeps in LA: Ryan Conner, Christian Duguay, David Foster and booked by producer Nat Goldberg.  All comedy veterans, all hilarious and all fantastic human beings, we can’t think of a better team to bring you the Gandhi LA Show!

If you’ve been to the NYC show over the past 5 years, thank you so much for helping us make it awesome. If you’ve performed on it as well, you know we can’t thank you enough. We could never do it alone. Not even close. It’s been such an amazing team effort and so much fun and we’re excited about this next step. We look forward to bringing the same rockin’ show out west, with the same top notch talent and same amazing audiences.  More updates/info as we go into January.

So if you’re in NYC on Wednesday, hit up Gandhi NY! If you’re in Los Angeles, check out Gandhi LA!

Looking forward to a killer New Year and bringing you the best comedy in NYC and LA every Wednesday at 9:00pm!